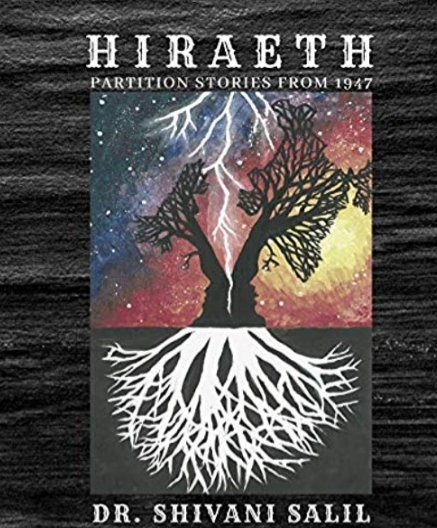 My grandmother died almost ten years ago. I remember her last few years, when she would invariably express her desire to visit her maternal home, one that she hadn’t been to in a long time. One that was now just another version of the place she had once known.

What is that one thing that makes us long for places, homes, eras and practically everything that existed once? You experience a sharp pang, like you have just been stung, never to recover. You reminisce fondly, but that isn’t enough. It is a thirst that is hard to quench. And may only be doused by revisiting a place or an experience. And because déjà vu with old experiences is near impossible, one mostly carries the thirst to their grave.

This also explains our passionate travels to “once upon a time”. This inexplicable pining can only be felt, and can neither be shared nor spoken of.

But when I picked up Hiraeth- Partition Stories from 1947 written by Dr Shivani Salil, it was like a series of cascades of emotions felt when one would remember their home, that once was. I was immediately transported to the day when I first heard Pankaj Udhas crooning Chhithi Aayi Hai and could not hold myself back, even though I was home, even though I was where I belonged. And yet, I could sense what it must be like to be away from home.

Mostly we move out in search of work or otherwise, to be sure that we will return someday. However, in history, we have several stories of mass exodus, when people have moved base never to return. One such historical event was the partition of India in 1947 that led to the formation of two nations- India and Pakistan. People on both sides of the border were forced to leave their homes, with whatever they could carry with them, and begin life anew in another place. Many lost their homes, their businesses, their friends; they also took to rebuilding life for themselves. And though, physical assets may have been regained, what they lost in the bargain was the hope to ever get back to their place of origin. And hence Hiraeth.

Dr Shivani Salil captures the emotions of all those “refugees”, as they were called, and serves them raw. Reason enough for the twenty-four stories to tug at your heartstrings.

A special mention of the seventh story, “Hiraeth”, from which the book borrows its title. It is the time for Diwali and Taro’s heart aches as she spends her days in a refugee camp and remembers the good, old days of festivities back home. As she plunges into her sea of memories, you dive along with her. The imagery is strong and you can almost sense the film roll before your eyes.

“Omar” is another marvel that brings forth the “double-edged sword” nature of the two-nation theory and the dichotomy faced by its own crusaders. Ever wondered what happens when the conscience weighs heavy?

Even as you ride upon a wave of sentiments about what happened more than half a century ago, you are introduced to the mountains that people on both sides of the border still carry. “Zakhm” leads you to the denouement and weighs heaviest on your emotions. Written in the form of a diary entry, leaves a knot in your throat.

Some stories definitely leave you asking for more and you wish they wouldn’t have ended abruptly. But the book rides high on sentiments and is transparent as well as honest. It sensitizes you and certainly makes for a great Sunday read! You can order it here on Amazon.

Finally, it reminds me of a poem that I wrote sometime in April and which you can read here. [CRAVING (Hiraeth)]

2 Comments on “Hiraeth- Partition Stories from 1947”