That is how many empires were built across the globe. What began just as trade, gradually shifted gears and as they say, the English were high on power! However, it is also said that every empire passes on a philosophy to the world, quoting that its mission is not to loot or control, but to educate and liberate.

Well, the twitchiness of this statement, is not for us to discuss. For we are not tracing how imperialism spread its roots, but we simply have a case of how an unknown village rose in stature to become the Summer Capital of the British Raj.

The English were beginning to enjoy their sojourn in the hills. To stay in the beautiful bungalows that were beginning to come up, they had to pay a rent for a season, which was usually nine months long. If they wished to stay longer, they were charged extra. The rent varied from 150 rupees to 1500 rupees for an entire season!

It is said that in January 1837, when they enjoyed snow after a long time, they found all the more reason to move to this new-found heaven. More and more palatial houses began to come up. Locally found stones shaped into squares and rectangles were made from rocks and adjusted together to make sturdy walls. Cement was barely used, except on the outside. The Mahasu forest provided the much-needed timber for the poles around the corners. The roofs were angular, for obvious reasons. Every house had a fire-place and a chimney, and there was none without a garden with the most beautiful wild flowers. The hills would run out of flowers that soon began adorning the dining halls and ante rooms.

These houses had very fancy names too, such as, Swiss Cottage, Fountain Hall, The Hermitage, Victoria Lodge, Sunnybank, Abbeyville and many more. The English were even fond of making houses on hill tops (you can make that out from those on Ellysium Hill and Summer Hill that still form a part of the town today). They wished for the sun to keep the house warm in winters. This was unlike the local population that lived in the valleys.

However, this wasn’t the best decision. The English weren’t used to the less amount of oxygen on heights and the locals were clever in this aspect. Hence, there were some common health issues that often crept up. Of these, wheezing was one and indigestion another. In fact, indigestion was so common among the British in Simla that doctors almost always recommended eating at least five meals in small portions! I know of so many people in the hill town who still suffer from this. It was even quoted by a resident in one of his journals that Simla was great for your health when you were healthy, but the moment you fell sick, it was good for you to return home! There were enough reasons for legs to get tired and for lungs to suffer for want of oxygen, almost always!

Sometimes, the English brought along with them servants from the plains. The reason being that Simla was known for its bad servants! It was even quoted that the servants here “fleeced you to their heart’s content”.

Hence, with the popularity of Simla at its peak, and the beginning of its romance with the British, the Governors-General and Viceroys made it their summer residence. The Ridge and the Mall Road came up as the main markets where a lot of action always happened. This hasn’t changed much even today!

There was mass migration to Simla. It was way ahead of other hill stations, namely Mussorie or Nainital. But, as already mentioned, it did not have an easy terrain. In the first place, it was difficult to reach the town all the way from Kalka. The infrastructure was bad. Roads were narrow and bumpy. In Simla itself, it was difficult to move from one place to another. There was a lot of walking to be done, which leaves tourists in jeopardy even today.

So, the British began to hire coolies, who carried heavy loads on their backs as they climbed up hill. If enough labour was not available locally, the English forcibly brought porters from distant places. Sometimes, people were also carried by these porters in Jampan (sedan chairs) and doolies. And not just around the town!

Yes, the journey from Kalka to Simla was arduous. Usually the English had two choices. The government van or the “dawk gari”. The roads were rough and the springs of these gaaris were wrapped in ropes to reduce the roughness of the jolts. But on many a night the gaaris broke down due to the rains which made the Ghagar river, a few miles from Kalka, overflow. Sometimes, the passengers waited for days before they could embark on the journey again.

The British, who liked to spend their summers in Simla, were criticized for spending an entire season, cut-off in the hills.

It is said that good roads are the first step towards good development. The English were aware of this. Hence, a new cart road, called the “Grand Hindostan and Tibet Road” was designed by Major Kennedy and came up in the Vice Royalty of Lord Dalhousie in 1856. And this carved the way for Simla turning into the Summer Capital, officially, in 1864.

Wonder how people now travelled from Kalka to Simla? Several times, the journey was undertaken in Jampans by women, doolies by children and on ponies by the men. All at the expense of the poor porters or coolies who were also used along with mules to carry the luggage. Then came in the ekka or the country cart, a one-horse carriage. The bullock cart was also used for the journey and finally the Tonga was brought, all the way from the Central Province. 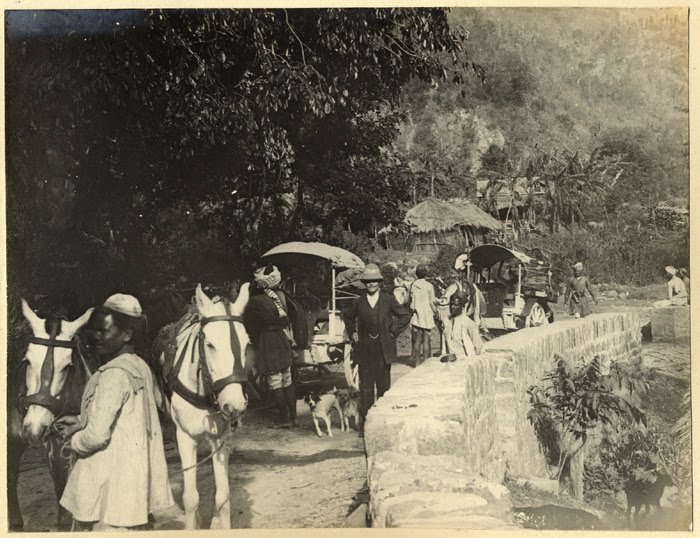 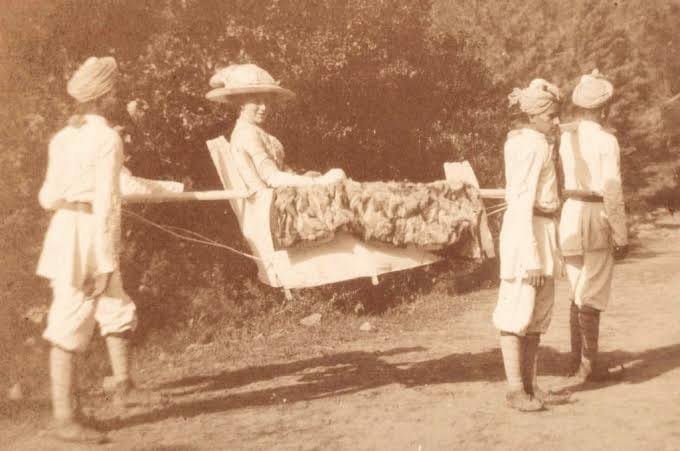 (The tonga as a mode of transport; An English lady being carried in a jampan. Image source@internet)

But these modes of transport were slow and tiresome. And with so much happening in Simla, it was important to connect it to the rest of the country with a faster and better means of transport. This laid the foundation of the S(h)imla-Kalka Railway, which is yet another story of marvel. We shall unfold the same in the next chapter.

Until then, relish this amazing fact: 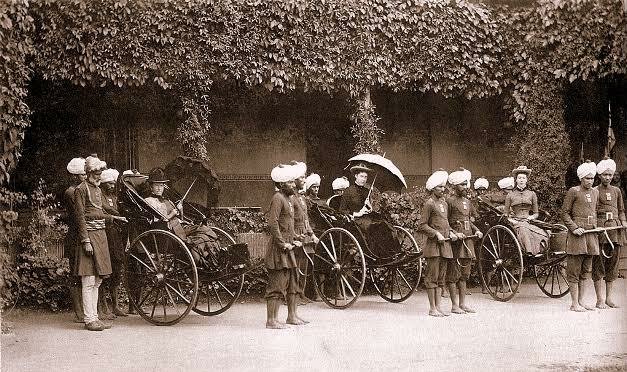 The Mall Road was also known as “Thandi Sadak” or Breezy Lane. It was meant for pedestrians and horses (horse riding is still popular on the Ridge). The credit for widening the road in 1878 goes to Lord Lytton. It was then that the first wheeled vehicle, “rickshaw”, was introduced. It was pulled by four labourers (Indians) who wore a uniform and turbans, but ran barefoot.

Read the next chapter here.

This is a series on Shimla, the Queen of Hills and its not-so-historical tale. Source: @various sources internet

I am taking my blog to the next level with #MyFriendAlexa

115 thoughts on “Road to the Summer Capital”