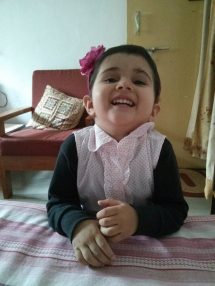 It was not the only time and certainly not the first one. Yet, as I bid goodbye to my younger one on her first day to kindergarten, my heart skipped many a beat. My son, now seven, raised quite an objection as he recalled how apathetically he had been pushed into formal schooling at a much tender age. Sibling jealousy is not new to me. I myself have witnessed, or so I feel, unfair treatment, being the elder one in the family. The perks, privileges and pampering are not for us. But her

In fact, it was quite a battle-deciding the grade of my little one. Playgroup or nursery-while the school recommended nursery for her age, the mother in me could only agree to playgroup. It would be unfair to burden those tiny shoulders with the insipid sleeping and standing lines. I’ll not indulge into comparisons with my “genius” son (reason cited by me) who had finished nursery before he was three!

So, the unavoidable journey began. The little girl did all that was needed-she howled and screamed, clung on to me and refused to let me go until I firmly pushed back her hands and rushed out of the gate leaving her to the care of the school staff. But not to tread back home. I spent the next two hours on the road right outside, so that I could be available at the shortest notice, if need be. This became a routine of sorts putting all my other chores to hold until the principal finally told me to send her off in the school van and wait at home for her to be dropped back. It was a difficult decision, finally taken.

However, this did not reduce the complexity of the situation back home. When all the pleading and cajoling with me failed, my daughter turned to her father, who assured her that she wouldn’t be sent to school. Only to her dismay he was already off to work before she woke up the next morning and her mother was relentless. While she failed to settle down with the idea, there was another heart-rending experience added to my kitty. My cuckoo bird suddenly became “papa’s doll”-from now on only her father could feed her, play with her and put her to sleep. Mommy was the quintessential enemy who sent her to school. Those few days that she chose to be thus, I felt a queer vacuum, a loneliness I don’t remember having experienced ever before. I would fiddle with her little fingers after she slept wanting to pull her close to me but didn’t do so from fear of disturbing her sleep. And so, passed a few more days and I continued to send her to school.

Now it’s been a month since we started this journey called kindergarten. Yes, my daughter continues to go to school. She jumps around the house waiting eagerly for her van, joyfully recalls the events at school, sings rhymes for all of us and once again she tells me to feed her, to play with her and to put her to sleep! I still say ‘goodbye’ to her each morning, but it certainly does not have the pangs of the ‘first goodbye’.

One thought on “The First Goodbye”